Are Blacks and Jews too sensitive? Jewish Board of Deputies address

Late 2012, I was invited to speak at the Jewish Board of Deputies in Cape Town. 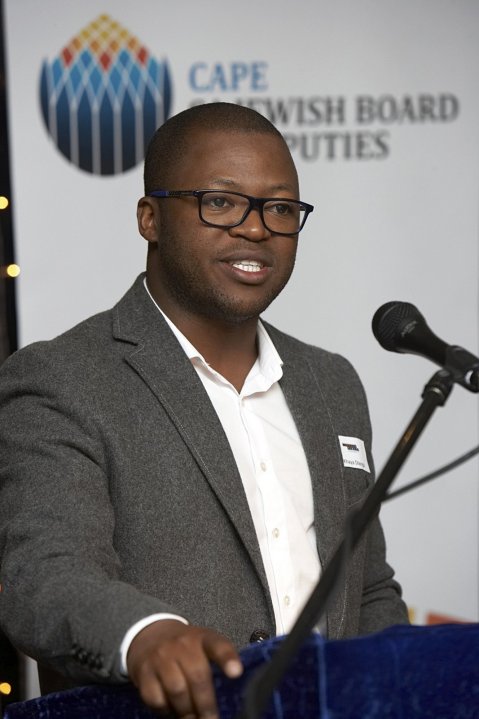 We cannot talk about freedom of expression and hate speech, nor can we ask whether Blacks and Jews are too sensitive or not, without putting tolerance on the table.

But the question arises, if we must be tolerant, how much should we tolerate? Should we have zero tolerance in order to eradicate hate speech?

The problem with zero tolerance is that you allow hate to go underground, when it should be allowed – so that we can see it. Because when we can see it, we are able to combat it. And, to a certain degree, exert some control over it.

An end of tolerance would mean that we would have no comedians, no artists. There’s always someone offended by their work. There would be no Spear. (That image … I’m terribly sorry for bringing it up. Do excuse the pun. Or not.)

However, does tolerance mean that we have to tolerate everything? Of course not, that would be absurd. In the words of French philosopher André Comte-Sponville, “To tolerate the suffering of others, to tolerate an injustice of which we are not a victim, or an atrocity that we are spared, is not tolerance but selfish, indifferent, or worse. Tolerating Hitler meant becoming his accomplice, at least by omission or neglect, this kind of tolerance was already a form of collaboration.”

We should not tolerate things that should not be tolerated and use tolerance as an excuse.

Karl Popper in his 1962 book Open Society and its Enemies, notes that “if we extend unlimited tolerance even to those who are intolerant, if we are not prepared to defend a tolerant society against the onslaught of the intolerant, then the tolerant will be destroyed and tolerance with them”.

Since we do not want to be destroyed we have to strike a great balance between what should be tolerated and what should not.

The right to be sensitive
Black and Jewish people have suffered at the hands of others, and for some time, the world turned a blind eye. It could be argued that since Jews came so close to destruction and blacks suffered so much, both groups are living proof of what lack of tolerance is capable of.  Perhaps we have earned the right to be sensitive. If you have never been on the receiving end of an injustice it is easy to accuse the victim of being overly sensitive. To accuse the victim is also an attempt to force him to bury the crime that was committed against him.

Sadly, when you have been a victim of a mass humanitarian crime, the crime of the past becomes part of one’s identity. This is why blacks and Jews can be – can rightly be – sensitive when attacked. It is precisely because all things started out as language before  progressing into actions that resulted in one form of oppression or another.

But as much as I might not agree with a person telling black people to get over apartheid, I will defend the jack-ass’s right to speak his foolishness.

It could be argued that since Jews came so close to destruction and black suffered so much, that both groups are living proof of what a lack of tolerance can do to a people.

Let us not forget that people who are extraordinarily sensitive to slights can also be the first ones to laugh when someone who does not belong to their group is being mocked. If one is a true advocate of an equal and free society, then we must be equally offended when some group other than the one to which we belong is unnecessarily and unjustly injured. We should not remain silent when the people we do not like are the target of hate speech. You can dislike someone but still respect, protect and be a defender of their rights. If we only demand justice for people we like then we are not just.

It is inconsistent with free speech to only defend it when people are trying to silence you.

It is not enough that we are against hate speech, but we have to support free speech, especially when we do not agree with the content of what is said – within reason. Free speech is not only free when others say what we agree with, it also remains free speech even when we disagree.

Sensitivities have to be considered. For example, when the premier of the Western Cape made her now very infamous “refugee” and “professional black” comments earlier this year, I didn’t think she was racist nor did I think she was abusing the privileges she had been given in the Constitution.

But free speech comes with responsibilities and one must also accept the consequences that may come with that responsibility. The consequences of coming close to the line are not predetermined; they often come up when one doesn’t even expect them to. Helen Zille did not expect the firestorm that came with her saying the things she said. It was just a case of lack cultural sensitivity.

At the time, I said that the premier failed to apologise but instead, went down the meandering river of defending what should not be defended. She failed to be humble yet strong. To apologise yet make a point. Which was not surprising because the humility and sensitivity index is at an all time low in politics.

Considering her position in society, she ought to have been more sensitive about what she was going to say, particularly for someone who is the leader of an opposition that is under constant scrutiny – with the ANC always waiting for her to say something which can make it shout, “You are a racist!”

The unfortunate consequence of the sensitivity deficit is that when one speaks, and the language used lacks cultural sensitivity, everything that was said before or after is lost as we all focus on the cultural sensitivities. And then the point one was trying to make gets lost.

In the case of politicians, leaders have a greater responsibility to be culturally sensitive than ordinary citizens.

We all remember when the ANC organised a march against the Goodman Gallery demanding the removal of the now very famous Spear painting. We all remember the tragic events that a few weeks ago when mineworkers were shot and killed. There was no march by the ANC. A few days after the event I wrote the following tweet, “If only the ANC could be as mad about poverty and the events at Lonmin as it was about the Spear.”

The right not to be offended is not in Constitution. As Ricky Gervais so eloquently put it: “Just because you are offended doesn’t mean you’re in the right.” We mistakenly think that because we are offended we must be right. Which of course is not always true.

As I’ve said before, “The office [of president] has to be treated with dignity, for the citizen who holds it is our ambassador to the world. He represents us equally, whether one voted for or against him, he is our president. People do not deserve respect because of the office they hold; they deserve it because of their character. If the office of the president deserves respect, then whoever holds the office should treat with the respect it deserves.”

What is the role of the artist? The artist is not meant to paint according to his or her race, but according their consciousness. Brett Murray was not being racist nor insensitive when he painted his painting. Art has a role in contemporary society to provoke, to say that which others are afraid to say in public. It is also there to reflect the views of a society at that given time in moment. It is there to be a mirror – to reveal to us what we are or what we have become. If you look in the mirror to find a fat person staring back, it’s you!

South Africa is a wounded society. The cut is too recent. The wound is too deep. The scab has not healed. And with each poke, the wound reminds us that it is still there.

We can all philosophise and discuss these things. But people are not constitutions. They are living breathing human beings. All we really have to be and remember is that we are human beings on a human journey. That if we treat people as we wish to be treated then we would all be okay and we might not need to have a written Constitution. But unfortunately we do need it for our own sake.

This is an edited version of an address Khaya Dlanga delivered at the Cape Jewish Board of Deputies “Censor/tivity” Conference: Freedom of Expression & Hate Speech in 21st Century South Africa on September 9 2012.

§ 2 Responses to Are Blacks and Jews too sensitive? Jewish Board of Deputies address

You are currently reading Are Blacks and Jews too sensitive? Jewish Board of Deputies address at Khaya Dlanga's life on the "internets". All on one blog..